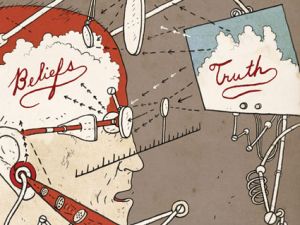 The first step toward change is awareness.  The second step is acceptance.

Have you ever really believed in something and found out that it wasn’t true? Maybe it was your Santa Clause moment. That time when you discovered Santa really didn’t bring your presents. I never had that moment with Santa. That’s one falsehood I didn’t grow up believing.

I’ve had many of those moments though. The first came in my late teenage years. I had just read a book on how “Christian” America’s founding fathers were. So being a lover of God and history I had to go read their writings and biographies to see their faith in action. I read Jefferson and Franklin and was like “What the hell was that author thinking?” So I said “Well, maybe they weren’t but I bet Washington, Adams, Madison and others were. Nope, Nope, Nope! Now I’m not saying that I found no Christians, but the vast majority of the founding fathers were not conservative orthodox Christians as I had been led to believe.

Still that did not change my belief in Orthodox Christianity and I went on to become a pastor and surprise surprise, college brought a few more, “What??!” moments.

I was taking my Theology 1 class and had to write a paper. I chose to write on the canonization of the Bible. When I was young, I was basically led to believe that these wonderful Christian men got together and in unison chose exactly these books because God led them.   Ummm Nope. They fought over books put in, fought over books left out and pretty much chose the books that Eusibius wanted because he was Constantine the (not so) Greats right hand man when it came to religion. The same Constantine who made the religious leaders create the Orthodoxy of religion by getting rid of the Arians and the vote there was almost unanimous. Those couple that voted no were exiled from the empire. Hmmm. I wonder why it was almost unanimous. Could it be that people didn’t want to lose their jobs, homes, or lives?

Then I started studying the Bible about the Rapture. That’s a huge belief in the conservative world.  But it just doesn’t fit anywhere in the Bible unless you like to look at your Bible as a pretzel and twist away your doctrine. But hey we can make money with books and movies so let’s keep the deception going…

Those moments kept coming and coming and coming. Especially as I read about the late Roman Empire and its hold over Christianity. One big reason I love the separation of church and state. And while we are being political let us at least acknowledge that the Republican Party has no interest in religion except that it great for getting votes.  The Republican Party is nothing more than a bunch of Pharisees with the Tea Party candidates being their High Priests and you know what Jesus thought of them.

The Democratic Party is not Satan’s tool as I was led to believe either. That was another “lie” that I had to overcome.

I had to learn that Muslims are not evil or setting up the anti-Christ and neither is the pope, most people on welfare are not milking the system, immigrants are people too. Did you know that the earth isn’t 4,000 years old or created in seven 24 hour periods? Ok, those are ones I never believed, but I know people who do.

Soon my naïve beliefs of youth one by one fell off, each one easier and not as noticeable. The rules of the church fell away and were replaced with life and love. My love of God grew, my love of people grew and I learned …….